When Dreams Were Fortune Tellers

A Conversation with George Pigman about Conceptions of Dreaming from Antiquity

At the beginning of Homer's Iliad, a plague is devastating the Greek army. For advice on what the army should do, Achilles, the foremost Greek warrior, suggests consulting not a medical or war expert but a dream interpreter. This is one of the earliest Western literary examples of the dominant thinking about dreams at the time—that they could reveal the future and help people live their lives by instructing them on how to succeed at an endeavor or cure a disease, for example. By the 19th century, this supernatural view of dreams had largely, although by no means completely, given way to more naturalist, rational approaches to understanding our sleeping visions.

In his new book, Conceptions of Dreaming from Homer to 1800, Caltech professor of English George Pigman delivers a comprehensive account of ideas about dreaming from the Homeric epics through the early modern period, and describes how these views slowly evolved.

We sat down with Pigman to talk more about the themes of the book and what inspired him to write it.

What gave you the idea for this book?

I have been studying theories of dreaming on and off for the past 20 years. While in the middle of researching Freud's review of the scientific literature in his 1899 book The Interpretation of Dreams, I became more interested in the fact that there was no comprehensive study of theories of dreaming during the 19th century, or the time before then. That got me interested in writing such a book myself.

Does your book start with the earliest records of dream concepts? And why did you stop at 1800?

There are some early references to dreaming in Babylonia and Egypt, but I'm not an expert in that area so I began with the earliest works in Greek, which are by Homer. At first, I was going to go all the way through the 19th century, but as I worked on the book, I began to see that substantial changes had occurred by the end of the 18th century. At that time, more people became interested in explaining dreams from rational perspectives rather than trying to decide which ones foretell the future. The 19th century is the first period in which natural philosophers, scholars, and scientists often ignore the belief that dreams are a form of divination.

Does this idea that dreams reveal the future still persist today?

Absolutely, interest in dreams for what they can reveal about the future is still very prominent today, as googling "dream interpretation" will quickly reveal. A survey of Boston commuters a decade ago revealed that two-thirds of them subscribed to this belief. While writing the book, I was chatting with someone after an earthquake. He told me he had dreamed that a tsunami destroyed Santa Barbara—and the big one would hit L.A. in a month. Before the month was out, he had moved his extended family to Texas.

Can you give us an example of how people used dreams to reveal their future?

In ancient medicine, there was a practice called incubation. Sick people would go to the sanctuary of Asklepios, the god of medicine, and would sleep there in the hope that he would visit them in a dream. The god might appear in the dream and tell them to do something—or might actually cure them in the dream.

Dreams before battles were particularly momentous, and many generals reported having them. The most famous and consequential one is that of Constantine, who would later become the Roman emperor Constantine the Great. He dreamed that Christ urged him to make an image of the cross, which would protect him against his enemies. Upon waking, he decided he would only worship this god, and after he was victorious in a battle in 312 CE, he legalized Christianity and took steps toward making it the dominant religion in the Roman Empire.

What is the main message readers should take away from the book?

In the period that I'm concerned with, there is no simple narrative of progress from a superstitious belief that dreams foretell the future to the beginnings of a scientific view that dreams are natural phenomena that are to be examined solely in scientific terms. You find more and more of these naturalistic beliefs as the 18th century goes on, but you still find, by the end of the 18th century, natural philosophers who are completely wedded to the possibility that some dreams, at least, are god-sent revelations of the future or demon-sent revelations meant to lead people to their destruction.

Another thing to understand from this period is that many people wanted to study and classify dreams for the same reason they studied the stars—to learn what would happen to them in the future. People wanted to know which dreams they should pay attention to—which dreams were indeed telling them about the future—and which dreams they could safely ignore because they were just rehashing events of the day or indicating states of their bodies.

What was your favorite part of writing this book?

I enjoyed discovering things that, to my knowledge, no one else had ever noticed before. For example, in the 18th century, there was a German philosopher named Christian Wolff, whose influence on psychology and philosophy is well-known. What no one seems to have suspected is that he was the most influential dream theorist of that time. Discovering this gave me a great sense of satisfaction.

What are you working on now?

I am currently editing and translating a treatise on dream theory, written in Latin and published in 1562 by an Italian named Girolamo Cardano, who was well known for contributions to mathematics and technology. It is, I think, the most important treatise on dreaming in the early modern period. I hope that the book will form part of a series from Harvard University Press on Italian Renaissance works written in Latin. I previously translated another book for this series, The Virtues and Vices of Speech by the Latin poet Giovanni Gioviano Pontano, that will come out in September. For over 40 years, I have translated little bits of things from foreign languages for books and articles, but these two books are the first time I've done complete works. It has been quite challenging and interesting. 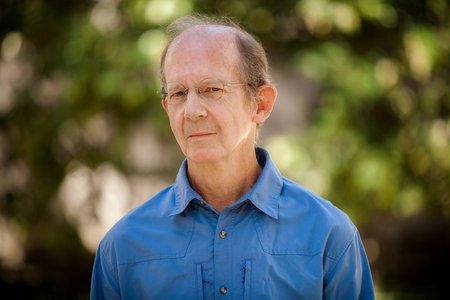 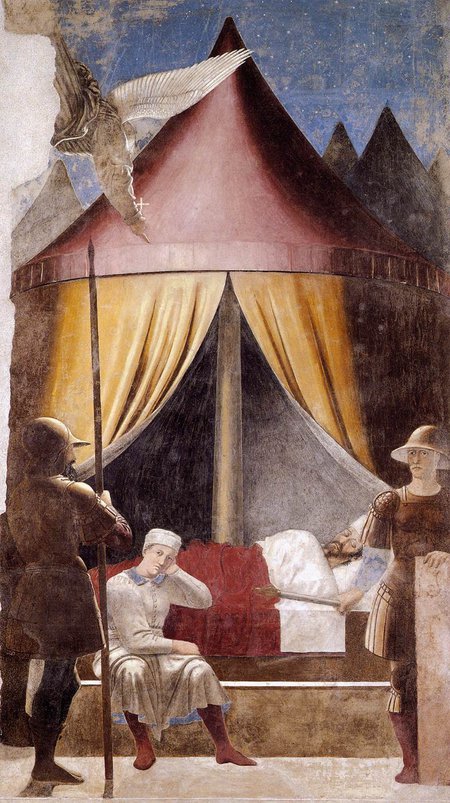 "The Dream of Constantine” from Piero della Francesca’s cycle of frescoes, “The History of the True Cross” (mid-fifteenth century), in the basilica of Saint Francis in Arezzo, Italy. Credit: CC0/Public Domain Image
Image Gallery Lightbox 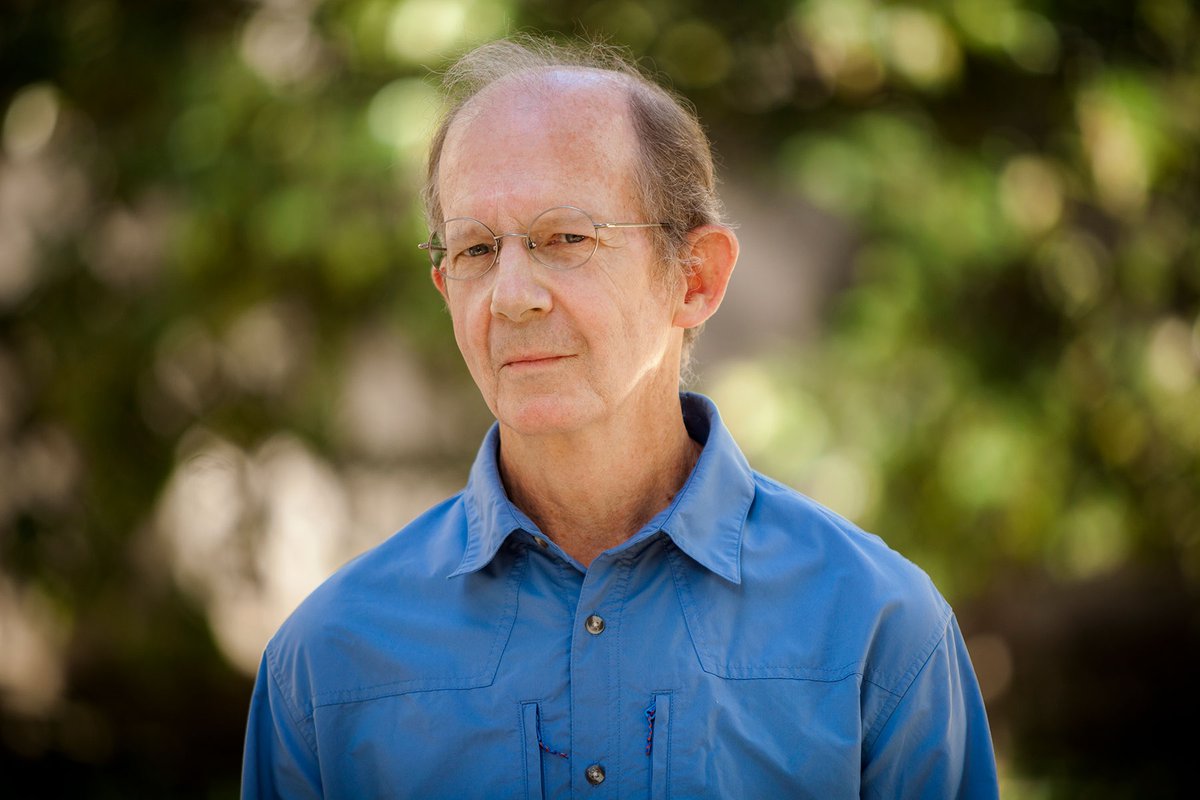 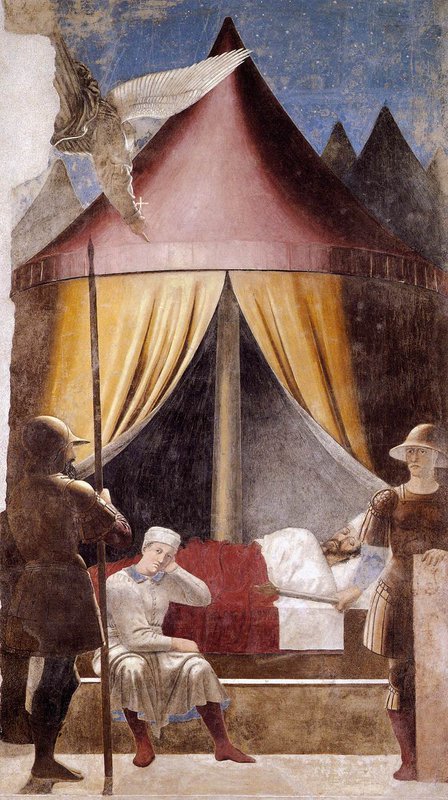 "The Dream of Constantine” from Piero della Francesca’s cycle of frescoes, “The History of the True Cross” (mid-fifteenth century), in the basilica of Saint Francis in Arezzo, Italy.
Credit: CC0/Public Domain Image
Download Full Image