Humans have a number of ways to learn how to do new things. One of those ways is through observation: watching another person perform a task, and then doing what they did. Think of a child that learns how to "adult" by observing their parents as they pay for groceries or make a phone call.

It has long been theorized that there are two types of observational learning: imitation and emulation. Imitation is when one person copies another person's behaviors to achieve the same goal. For example, if you watch the numbers a person dials to open a safe so that you, too, can open it. Emulation, on the other hand, occurs when someone watches another person achieve a goal, infers their goals, and then works to achieve those same goals without copying the other person's actions. In this case, you might watch the person open the safe, see there are valuables inside, and then later cut it open with a saw.

A new study conducted at Caltech has showed how the brain chooses between the two neural systems responsible for each of these kinds of learning. The study, which appears in the journal Neuron, reveals for the first time how the brain chooses which strategy to employ when faced with an observational learning task.

The research was led by Caroline Charpentier, a postdoctoral scholar in neuroscience who works in the lab of John O'Doherty, professor of psychology in the Division of the Humanities and Social Sciences.

"Depending on the context, sometimes imitation works best, and sometimes emulation is more reliable. Here we wanted to show whether and how the brain can keep track of both strategies in parallel and adaptively pick the best strategy in a given context," Charpentier says.

In the study, participants were placed in a functional magnetic resonance imaging (fMRI) machine so their brain activity could be monitored while they performed an observational learning task. Once in the machine, they were presented with virtual slot machines that would dispense three colors of tokens: red, green, or blue. Only one of those token colors had monetary value at a given time, but the participants were not told which color that was. The only information they were provided directly was the probability that a particular slot machine would dispense a token of a given color. 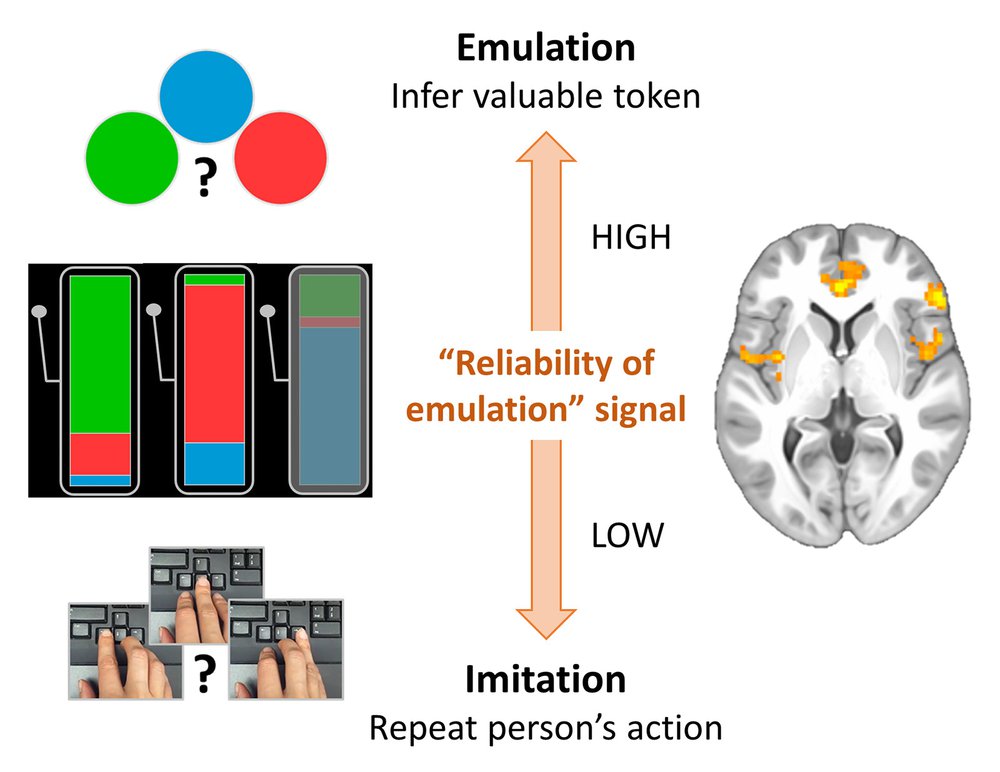 When emulation of another person's goals becomes too difficult, the brain resorts to imitative learning. Credit: Caltech
Image Lightbox 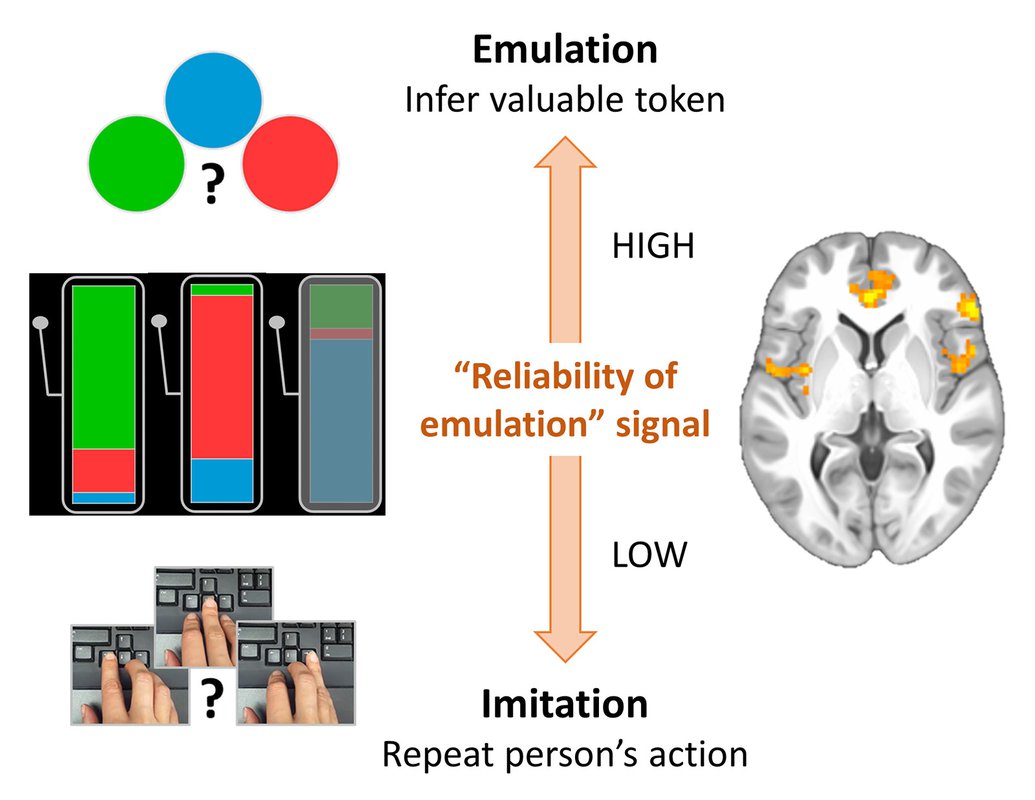 When emulation of another person's goals becomes too difficult, the brain resorts to imitative learning.
Credit: Caltech
Download Full Image

In most of the trials, the participants were asked to observe another person play the slot machines, and were told that this person had full knowledge of which color was valuable. By watching the other person pick which slot machine to play, they could gain information that would help improve their chances of receiving a valuable token when it was their turn to play.

However, because it was important for the researchers to discern which observational learning strategy the participants were using when they played the slot machine after watching the other people take a turn, the researchers created two different trial scenarios. In one scenario, the participant was permitted to play the same slot machine as the person they had been observing. Since they played the same machine, the participant could mimic the behavior of the other person and thus engaged in imitative observational learning. In the other scenario, the participant could not play the same machine, which prevented them from simply imitating the other player's actions and forced them to use an emulation learning strategy.

Charpentier says the fMRI data showed that each of these strategies correlated with activity in specific parts of the brain.

"Imitation tends to rely on regions that we refer to as the mirror system of the brain, which is active both when someone performs an action, such as grabbing an object off the table, or when they watch someone else perform that same action," she says. "The emulation strategy mapped more to the mentalizing network, which is used for inferring another person's thoughts and goals, or basically putting yourself in someone else's shoes and trying to think what they would think."

Charpentier adds that once the research team had completed the participants' brain scans, they were able to build a mathematical model of how participants learn from the observed player and chooses between the slot machines. The model suggests that the decision of which strategy to employ is determined by how reliable the emulation strategy is, and results show evidence for this "reliability of emulation" signal in several brain areas.

Charpentier says that, going forward, she would like to investigate the interactions of the regions of the brain involved in observational learning, or their so-called functional connectivity. In addition, she would like to see if the brain follows a similar model for choosing between other types of learning: if, for example, a person has to choose between learning from experience or learning from observation.

The paper, titled, "Neuro-computational account of arbitration between choice imitation and goal emulation during human observational learning," appears in the March 17 issue of Neuron. Charpentier's co-authors include Kiyohito Iiyaga and John O'Doherty. Funding for the research was provided by the National Institute of Mental Health (Caltech Conte Center for the Neurobiology of Social Decision-Making).