Why do we sometimes decide to take risks and other times choose to play it safe? In a new study, Caltech researchers explored the neural mechanisms of one possible explanation: a contagion effect.

The work is described in the March 21 online early edition of the Proceedings of the National Academy of Sciences.

O'Doherty and his colleagues found that the participants were much more likely to make the gamble for more money in the "Self" trial when they had previously observed a risk-taking peer in the "Observe" trial. The researchers noticed that after the subjects observed the actions of a peer, their preferences for risk-taking or risk-averse behaviors began to reflect those of the observed peer—a so-called contagion effect. "By observing others behaving in a risk-seeking or risk-averse fashion, we become in turn more or less prone to risky behavior," says Shinsuke Suzuki, a postdoctoral scholar in neuroscience and first author of the study.

To look for indications of risk-taking behavior in specific brain regions of subjects participating in the trials, the Caltech team used functional magnetic resonance imaging (fMRI), which detects brain activity.

By combining computational modeling of the data from the "Self" behavioral trials with the fMRI data, the researchers determined that a region of the brain called the caudate nucleus responds to the degree of risk in the gamble; for example, a riskier gamble resulted in a higher level of observed activity in the caudate nucleus, while a less risky gamble resulted in a lower level of activity. Additionally, the more likely the participants were to make a gamble, the more sensitively activity in the caudate nucleus responded to risk. "This showed that, in addition to the behavioral shift, the neural processing of risk in the caudate is also altered. Also, both the behavioral and neural responses to taking risks can be changed through passively observing the behavior of others," Suzuki says.

The "Predict" behavioral trials were designed to test whether a participant could also learn and predict the risk-taking preferences of an observed peer. Indeed, the researchers found that the participants could successfully predict these preferences—with the learning process occurring even faster if the participant's risk-taking preferences mirrored those of the peer. Furthermore, the fMRI data collected during the "Observe" trial showed that a part of the brain called the dorsolateral prefrontal cortex (dlPFC) was active when participants were learning about others' attitudes toward risk.

The researchers also found differences among participants in functional connectivity between the caudate nucleus and the dlPFC that were related to the strength of the contagion effect—meaning that these two brain regions somehow work together to make a person more or less susceptible to the contagiousness of risk-taking behavior. The work provides an explanation of how our own risk-taking behaviors can be influenced simply by observing the behaviors of others. This study, Suzuki says, is the first to demonstrate that a neural response to risk is altered in response to changes in risk-taking behavior.

"Our findings provide insight into how observation of others' risky behavior affects our own attitude toward risk," Suzuki says—which might help explain the susceptibility of people to risky behavior when observing others behaving in a risky manner, such as in adolescent peer groups. In addition, the findings might offer insight into the formation and collapse of financial bubbles. "The tendency of financial markets to collectively veer from bull markets to bear markets and back again could arise, in part, due to the contagion of observing the risk-seeking or risk-averse investment behaviors of other market participants," he says.

"The findings reported in this paper are part of a broader research goal at Caltech, in which we are trying to understand how the brain can learn from other people and make decisions in a social context," O'Doherty says. "Ultimately, if we can understand how our brains function in social situations, this should also enable us to better understand how brain circuits can go awry, shedding light on social anxiety, autism, and other social disorders."

The paper is titled, "Behavioral contagion during learning about another agent's risk-preferences acts on the neural representation of decision-risk." In addition to Suzuki and O'Doherty, other Caltech coauthors include instructional assistant Emily Jensen and visiting associate in finance Peter Bossaerts. The work was funded by a Japan Society for the Promotion of Science Postdoctoral Fellowship for Research Abroad and the Caltech Conte Center for the Neurobiology of Social Decision Making, which is supported by the National Institute of Mental Health. 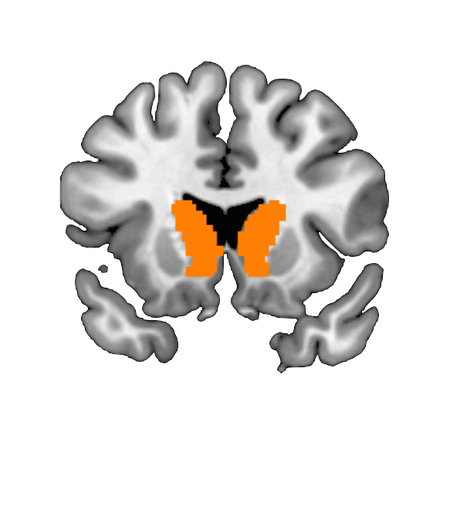 This image shows a region of the brain called caudate nucleus responding to the degree of risk in the gamble. Credit: J. O'Doherty Laboratory/Caltech
Image Lightbox 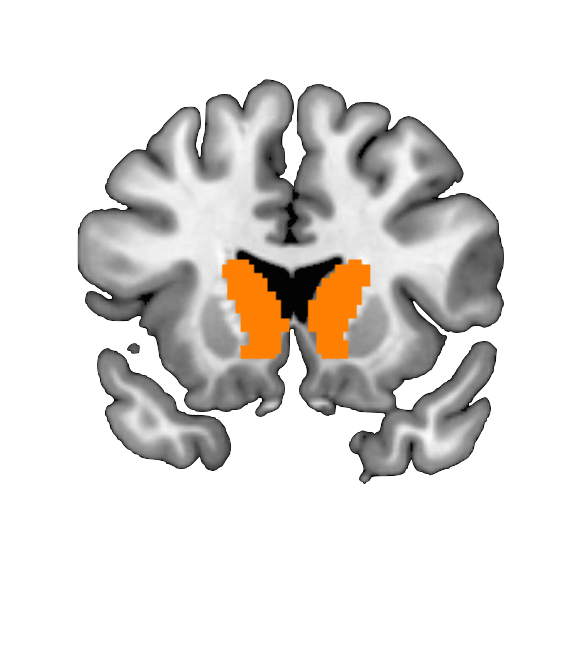 This image shows a region of the brain called caudate nucleus responding to the degree of risk in the gamble.
Credit: J. O'Doherty Laboratory/Caltech
Download Full Image
Subscribe
The Caltech Weekly