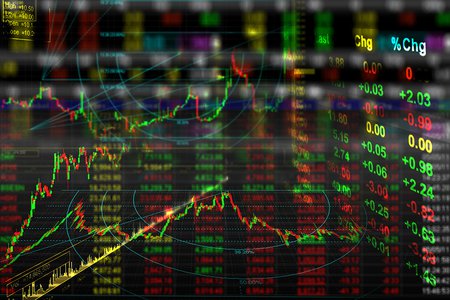 When it comes to economics versus psychology, score one for psychology.

Economists argue that markets usually reflect rational behavior—that is, the dominant players in a market, such as the hedge-fund managers who make billions of dollars' worth of trades, almost always make well-informed and objective decisions. Psychologists, on the other hand, say that markets are not immune from human irrationality, whether that irrationality is due to optimism, fear, greed, or other forces.

Now, a new analysis published the week of July 1 in the online issue of the Proceedings of the National Academy of Sciences (PNAS) supports the latter case, showing that markets are indeed susceptible to psychological phenomena. "There's this tug-of-war between economics and psychology, and in this round, psychology wins," says Colin Camerer, the Robert Kirby Professor of Behavioral Economics at the California Institute of Technology (Caltech) and the corresponding author of the paper.

Indeed, it is difficult to claim that markets are immune to apparent irrationality in human behavior. "The recent financial crisis really has shaken a lot of people's faith," Camerer says. Despite the faith of many that markets would organize allocations of capital in ways that are efficient, he notes, the government still had to bail out banks, and millions of people lost their homes.

In their analysis, the researchers studied an effect called partition dependence, in which breaking down—or partitioning—the possible outcomes of an event in great detail makes people think that those outcomes are more likely to happen. The reason, psychologists say, is that providing specific scenarios makes them more explicit in people's minds. "Whatever we're thinking about, seems more likely," Camerer explains.

For example, if you are asked to predict the next presidential election, you may say that a Democrat has a 50/50 chance of winning and a Republican has a 50/50 chance of winning. But if you are asked about the odds that a particular candidate from each party might win—for example, Hillary Clinton versus Chris Christie—you are likely to envision one of them in the White House, causing you to overestimate his or her odds.

The researchers looked for this bias in a variety of prediction markets, in which people bet on future events. In these markets, participants buy and sell claims on specific outcomes, and the prices of those claims—as set by the market—reflect people's beliefs about how likely it is that each of those outcomes will happen. Say, for example, that the price for a claim that the Miami Heat will win 16 games during the NBA playoffs is $6.50 for a $10 return. That means that, in the collective judgment of the traders, Miami has a 65 percent chance of winning 16 games.

The researchers created two prediction markets via laboratory experiments and studied two others in the real world. In one lab experiment, which took place in 2006, volunteers traded claims on how many games an NBA team would win during the 2006 playoffs and how many goals a team would score in the 2006 World Cup. The volunteers traded claims on 16 teams each for the NBA playoffs and the World Cup.

In the basketball case, one group of volunteers was asked to bet on whether the Miami Heat would win 4–7 playoff games, 8–11 games, or some other range. Another group was given a range of 4–11 games, which combined the two intervals offered to the first group. Then, the volunteers traded claims on each of the intervals within their respective groups. As with all prediction markets, the price of a traded claim reflected the traders' estimations of whether the total number of games won by the Heat would fall within a particular range.

The researchers observed similar results in a second, similar lab experiment, and in two studies of natural markets—one involving a series of 153 prediction markets run by Deutsche Bank and Goldman Sachs, and another involving long-shot horses in horse races.

People tend to bet more money on a long-shot horse, because of its higher potential payoff, and they also tend to overestimate the chance that such a horse will win. Statistically, however, a horse's chance of winning a particular race is the same regardless of how many other horses it's racing against—a horse who habitually wins just five percent of the time will continue to do so whether it is racing against fields of 5 or of 11. But when the researchers looked at horse-race data from 1992 through 2001—a total of 6.3 million starts—they found that bettors were subject to the partition bias, believing that long-shot horses had higher odds of winning when they were racing against fewer horses.

While partition dependence has been looked at in the past in specific lab experiments, it hadn't been studied in prediction markets, Camerer says. What makes this particular analysis powerful is that the researchers observed evidence for this phenomenon in a wide range of studies—short, well-controlled laboratory experiments; markets involving intelligent, well-informed traders at major financial institutions; and nine years of horse-racing data.

The title of the PNAS paper is "How psychological framing affects economic market prices in the lab and field." In addition to Camerer, the other authors are Ulrich Sonnemann and Thomas Langer at the University of Münster, Germany, and Craig Fox at UCLA. Their research was supported by the German Research Foundation, the National Science Foundation, the Gordon and Betty Moore Foundation, and the Human Frontier Science Program.