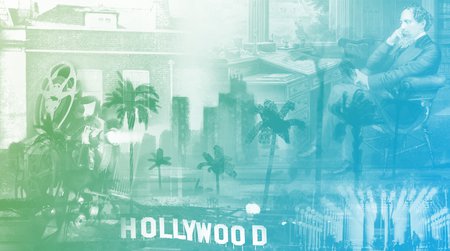 Caltech undergrads can now minor in visual culture, the study of different forms of visual media used across history and in the present day. The new program's classes include introductions to the field as well as deeper investigations into visual topics, such as Charles Dickens's London, old Hollywood cinema, and art in Los Angeles.

"There's been a long-standing interest in this area from a lot of students," says Dehn Gilmore, a professor of English at Caltech. "Students may want to go into film as an industry, video game design, or graphic design, for example. Or they may want to learn better ways of communicating their scientific discoveries and findings to the public."

The new minor is offered through the Caltech-Huntington Program in Visual Culture, which began in 2018 with a grant from The Andrew W. Mellon Foundation. The program is based in Caltech's Division of the Humanities and Social Sciences (HSS) in collaboration with The Huntington Library, Art Museum, and Botanical Gardens. Beginning this fall, it will be led by Professor of Visual Culture Brian Jacobson, who was recruited to Caltech as part of the program.

"The visual culture program is new, but we will also give Caltech students a window into the long history of Caltech's engagement with the arts," says Jacobson. "I'm also excited about encouraging our students to reflect on the many ways that science has been, and continues to be, driven by technologies and techniques for looking ever more closely at the world around us."

Some of the new track's courses are listed under visual culture, while others are cross listed between visual culture and other fields, including history and English. Students who declare a visual culture minor, explains Gilmore, will have priority in registering for classes that might otherwise fill up.

Students minoring in visual culture will learn to think critically about visual media in a wide range of contexts, from science, to film, to art, and more. Among other courses, Gilmore will teach one on Charles' Dickens's London. The class will explore the idea of the novelist as an alternative historian and the concept of the novel as a historical document.

Cathy Jurca, a professor of English who teaches classes in cinema, has developed a new class for the fall term in cultural heritage, which she will teach together with Julia Hori, the Fletcher Jones Foundation Postdoctoral Instructor in Contemporary Literature. The class takes a closer look at food, architecture, and other aspects of Los Angeles culture and involves fields trips, including a very short stroll to the recently relocated historic Wilson Court Bungalows. "Why didn't Caltech just tear down those bungalows? These are questions we will explore," she says.

"We live in a world of images and screens, and visual literacy is an important part of being an educated, thoughtful person in the world," adds Jurca.

The visual culture program also invites artists-in-residence to collaborate and teach at Caltech. Lia Halloran, an artist whose astronomy-themed exhibit Deep Sky Companion is now on display at Caltech's Cahill Center for Astronomy and Astrophysics, will join Caltech this winter. Elin O'Hara Slavick, an artist, poet, writer, and a longtime professor at the University of North Carolina at Chapel Hill, will join in spring 2022.

"It's been exciting to see how much interest in the visual culture program has been building," says Gilmore. "Some students always knew they were interested, and others have become more interested once they learned more about it."

A full list of visual culture courses can be found at https://www.hss.caltech.edu/courses/undergrad/department/VC/2021-22.