Dykstra is a historian specializing in late imperial Chinese history (the Qing dynasty). She is particularly interested in how government and economic institutions of the time interacted with the daily lives of people.

Letters from students supporting Dykstra's nomination for the prize spoke of how her courses not only changed their appreciation for history but, in some cases, changed their academic trajectory as well.

"Before coming to Caltech, I hated history," one student wrote. "After taking Maura Dykstra's 'History of the Chinese Empire,' I began considering a history minor. Even as her sharp questions and insights shattered my assumptions, she left plenty of room for me to explore as I pieced together my own connections and conclusions. Thus began my quest to take every class taught by Professor Dykstra."

Two other students, one majoring in computer science and the other double majoring in biology and chemistry, both added minors in history after taking one of Dykstra's courses.

Dykstra joined the Caltech faculty in 2015. She earned her PhD in history from UCLA in 2014. She has served as a postdoctoral fellow at Harvard's Fairbank Center for Chinese Studies and has held residential fellowships at the Max Planck Institute for Legal History and Legal Theory, the Taiwan National Central Library's Center for Chinese Studies, the University of Tokyo Graduate School of Law and Politics, East China Normal University, and the Max Planck Institute for the History of Science.

Dykstra advises history theses and runs Caltech's History Thesis Group. She was part of the group that created the Critical Intersections: Conversations on History, Race, and Science seminar series in the fall of 2020. The series explored the history and legacy of eugenics.

Peter Collopy, university archivist and head of Archives and Special Collections, described the History Thesis Group as a "humanities equivalent of Richard Feynman's famous course Physics X, a chance to ask anything and think together about how to answer it. Maura's work developing HxS, a community for discussions across the humanities and sciences, has similarly created spaces in which one can discuss anything."

"I was excited to come to Caltech because I believe that humanistic research is the best field for asking large, even impossible, questions about the human experience," Dykstra says. "Since it is in this territory that all problems of morality and justice ultimately dwell, the practice of inquiry and exploration in humanistic domains is fundamental to navigating right and wrong in the world.

"Because I have always believed that humanistic and scientific inquiry must be undertaken in dialogue with one another, being awarded the Feynman Prize is more than a validation of my dedication to students in the classroom; it is, even more, confirmation of my conviction that the humanistic pursuits have a place in the lives and minds of scientists facing a world full of complicated choices."

The Feynman Prize was established in 1993 to annually honor a professor who demonstrates, in the broadest sense, unusual ability, creativity, and innovation in undergraduate and graduate classroom or laboratory teaching. It has been endowed through the generosity of Ione and Robert E. Paradise, and an anonymous local couple.

Dykstra is the third member of the Division of the Humanities and Social Sciences to be awarded the prize, after Kevin Gilmartin (2014-15), the William R. Kenan, Jr., Professor of English and Allen V.C. Davis and Lenabelle Davis Leadership Chair and vice president for student affairs; and Morgan Kousser (2010-11), professor of history and social science, emeritus. Recent winners of the prize include Melany Hunt (2019-20), Dotty and Dick Hayman Professor of Mechanical Engineering; Ali Hajimiri (2018-19), Bren Professor of Electrical Engineering and Medical Engineering; Harry Gray (2017-18), Arnold O. Beckman Professor of Chemistry; Brian Stoltz (2016-17), professor of chemistry and Heritage Medical Research Institute Investigator; and Ellen Rothenberg (2015-16), Edward B. Lewis Professor of Biology.

Nominations for next year's Feynman Prize for Excellence in Teaching will be solicited in the fall of 2022. Further information about the prize and a full list of past recipients can be found on the Provost's Office website. 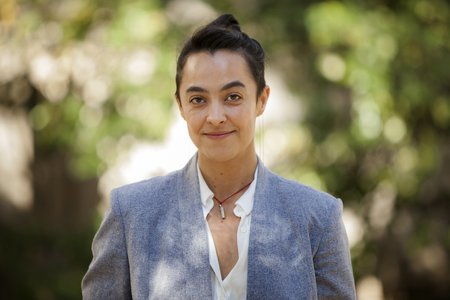