Materialities, Texts, and Images: A Collaboration Between Caltech and the Huntington Library

At an institution like Caltech, materiality is inescapable. Science and technology deal with physical things (or, at the least, with terms that stand in for physical things). In the humanities, however, the role of materiality is less clear. As John Brewer, Caltech's Eli and Edye Broad Professor of Humanities and Social Sciences, points out, working humanists have "no Mars Rover or sea urchin to manipulate," so their connection to the material is less obvious. Indeed, humanists often concern themselves with ideas, language, memory, and culture—all of which are mental constructs. "For a long time," says Brewer, "everybody in the humanities was interested in what everything symbolized, which was rather abstract and metaphysical and linguistic."

The pendulum has swung, however, and now humanists are reevaluating the role of materiality in their disciplines. The emphasis today is more on the "stuffness" of the humanities—the way in which all cultural artifacts, from books to blueprints to bus tickets, are relations between and manipulations of physical things. Paintings, after all, are made of oils and canvas and pigments; books are made of paper and ink, cardboard and cloth (and perhaps today, computer chips). How are they created? How are they used? How have they been preserved and why? Their tangible existence as objects is a critical part of the insight they can offer us about human beings and culture, about the present and the past. Even things of great interest in the humanities that cannot be classified as objects are inevitably material; spoken language, for example, involves air, tongues, teeth, and larynxes.

The humanities' interest in the material has given rise to a new collaboration between Caltech and the Huntington Library, a premier research institution in the humanities less than a mile from Caltech in San Marino, California. "Materialities, Texts, and Images" (MTI), a two-year pilot program funded jointly by Caltech and the Huntington, explores texts and images through the lens of the material.

Rather than following the usual model for research in the humanities—choose a discipline; choose a part of the world; choose a time period; choose a subject—MTI is a decidedly methodological project. It asks the most general question in its purview: how materiality, the embeddedness of culture within tangible things, can be most effectively studied and theorized. As Steve Hindle, W. M. Keck Director of Research at the Huntington, explains, the scope of MTI "is not restricted to any particular time period, so it's not medieval or early modern or modern; it's not confined to any particular discipline, so it's not designed specifically, much less exclusively for historians or literary scholars or art historians." Instead, MTI breaks down disciplinary boundaries, embracing the humanities in all their diversity, without asking anyone to water down their specific research interests.

Over-specialization can be a pitfall in the humanities, according to Brewer. The interesting work goes deep, searching out meaningful details and engaging in exhaustive research. But the most interesting work goes deep and then comes up broad, articulating the significance of very specific research topics for theories and methods in the humanities generally. MTI is designed to be a platform where humanists from disparate fields can create the kind of synergy that pushes the humanities as a whole forward.

Two visiting postdoctoral fellows who, according to Hindle, were selected because they were "as different as possible," have been brought on board this year to get the MTI program under way.

The first, Stefanie Sobelle, is a professor of English at Gettysburg College who studies the interrelationship of architecture and literature in late 19th- and 20th-century America. Sobelle's work, she says, investigates how both architecture and literature engage in a "conceptual process of imagining a world and then creating it, in the use of architectural language to talk about a text, and in the book as a three-dimensional space that you move through and inhabit, which often very intentionally manipulates your experience of that space."

Sobelle's MTI counterpart, science historian Alexander Wragge-Morley, most recently at the University of Oxford, works with texts produced by British medical doctors in the late 17th and early 18th centuries to examine how British medics dealt with "the interconnections between knowledge production and matters concerning sensation, emotions, and aesthetics," he says. In his work, Wragge-Morley has found that although the early 18th century was when "these key separations between science and the arts are supposed to have been coming into play, the archives show that the sciences and humanities are much more vested in each other than it's sometimes convenient to realize."

Under the provisions of the MTI program, Sobelle has an office at the Huntington this fall while Wragge-Morley has an office at Caltech. Midway through the year, they will swap, so that each has an opportunity to participate fully in the lives of the institutions that are sponsoring their work. In the spring and summer, each will organize a workshop with speakers from diverse fields who share their interest in pushing the boundaries between academic disciplines while focusing on the role of materiality.

Both Sobelle and Wragge-Morley are excited about the potential of developing more extensive intellectual ties between Caltech and the Huntington, involving Caltech faculty in the Division of Humanities and Social Sciences (HSS), as well as faculty and researchers in other fields at Caltech.

Wragge-Morley, for example, is eager to contact neuroscientists at Caltech who are pioneering "the science of beauty" (a scientific undertaking, he notes, that was announced by British painter William Hogarth in 1753). "I think there are very interesting connections that can be drawn between the types of work being done at Caltech—which we could rename 'Materiality Central,' after all—and contemporary work in the humanities." Meanwhile, Sobelle hopes to talk to Caltech scientists about the models they create, because a model, she says, is "a form of representation and also a thing in and of itself. What kind of models are engineers creating? What about biologists? What about chemists? What does a model mean differently in those different fields? Do they think of the model as an aesthetic object in itself, or not?"

MTI's broad vision promises to bring fresh life to the pursuit of the humanistic disciplines at Caltech, Brewer says. "One of the nice things about this project is that it's one of those capacious things into which you can stick almost anything. It's like Mary Poppins's handbag, actually." Many Caltech faculty in the humanities already pursue scholarship that explores the concept of materiality, and they will be active participants in the MTI program as it gathers momentum. For example, Jennifer Jahner, Assistant Professor of English, studies medieval manuscripts not only for their manifest content, but also for the manner in which they have been copied and bound by hand. Professor of History Nicolas Wey-Gómez specializes in the rise of imperialism and the global south during the Age of Exploration, research that has drawn him into extensive study of the physical maps created and used by explorers in the Atlantic region.

The MTI program also strengthens ties between two world-class institutions that grew up together in the San Gabriel Valley. Astronomer George Ellery Hale, one of the scientific "troika" (including physical chemist Arthur A. Noyes and physicist Robert A. Millikan) that built Caltech into a world-renowned science and engineering institute, also served on the board of trustees of the Huntington Library in the 1920s. Hale's dream was to use the resources of the Huntington to create a humanities division for Caltech, which at that time was restricted to the physical sciences. Instead, Caltech created its own humanities division in 1927, and Hale helped mold the Huntington into an independent institution available to scholars and the general public alike. Today, the Huntington hosts 1,700 scholars annually—170 are funded by the Huntington itself, making it the largest and most competitive fellowship program in the United States.

Caltech's HSS division and the Huntington have other existing collaborations. The Eleanor Searle Visiting Professorship in the History of Science and Technology brings leading scholars in the field to Caltech to teach for HSS and pursue their own research through the Huntington collections, while a joint postdoctoral instructor program draws junior scholars for research and teaching. For HSS division chair Jonathan Katz, the real excitement of MTI is that it will expand Caltech's relationship with the Huntington, "which has always enriched our humanities program and provided access to unparalleled archival sources for our scholars." The MTI program, Katz says, will "bring Caltech and the Huntington together as an intellectual hub for this kind of inquiry." 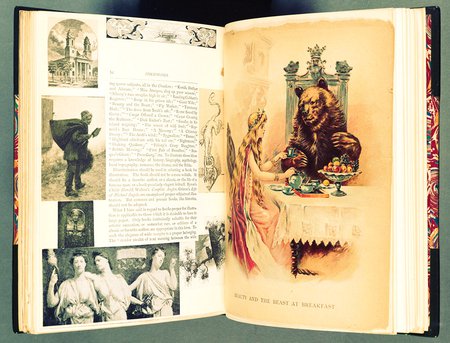 A "grangerized" or extra-illustrated book. From the late eighteenth to the early twentieth centuries, some book owners chose to add additional illustrations to bound books in their collections, a practice that highlights the materiality of printed texts. (Irving Browne, Iconoclasm and Whitewash. New York, 1886. Illustrated by the author. The Huntington Library, Art Collections, and Botanical Gardens.)
Image Lightbox 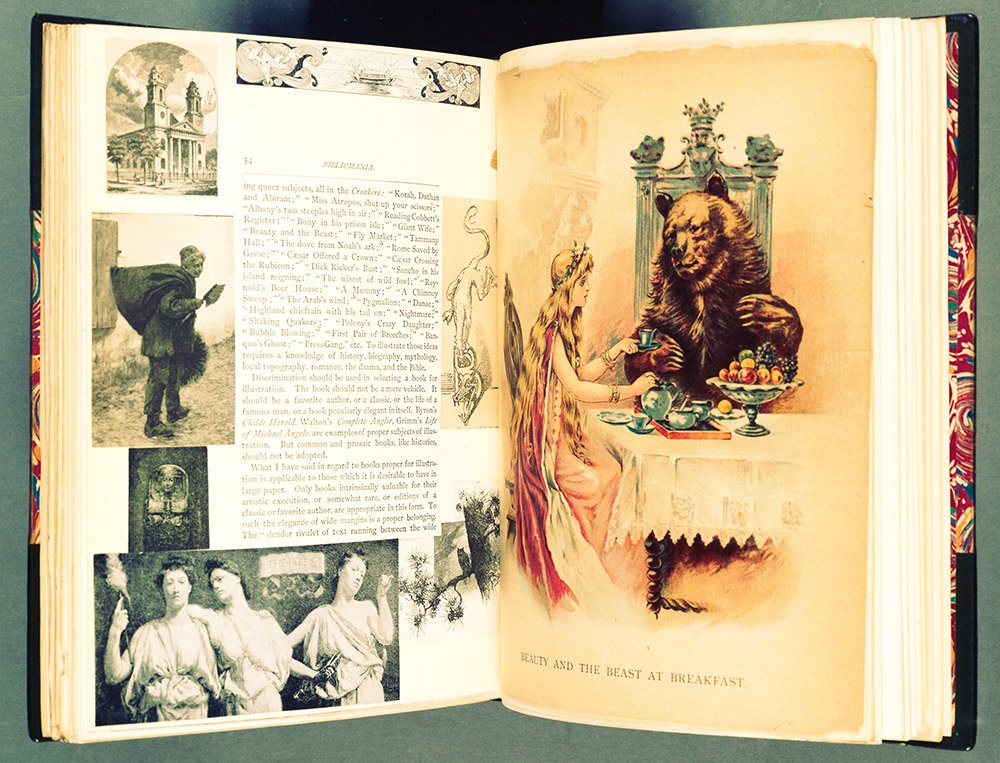 A "grangerized" or extra-illustrated book. From the late eighteenth to the early twentieth centuries, some book owners chose to add additional illustrations to bound books in their collections, a practice that highlights the materiality of printed texts. (Irving Browne, Iconoclasm and Whitewash. New York, 1886. Illustrated by the author. The Huntington Library, Art Collections, and Botanical Gardens.)
Download Full Image
Subscribe
The Caltech Weekly