How the Brain Makes Decisions About Related Bits of Information 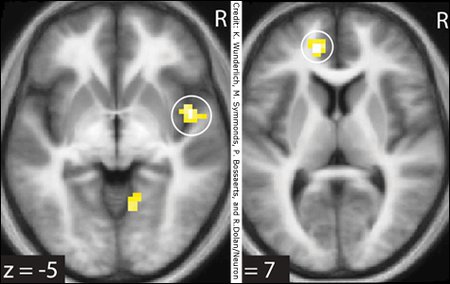 Functional magnetic resonance imaging (fMRI) measurements show neural activity in two parts of the brain when a subject plays a resource management game. The activity in the insula (left) is related to making predictions about correlation strengths, while activity in the cingulate cortex (right) is related to tracking the accuracy of such predictions. Credit: K. Wunderlich, M. Symmonds, P. Bossaerts, and R. Dolan/Neuron
Tags:
neuroscience and behavioral science, social science

PASADENA, Calif.—When making decisions based on multiple interdependent factors—such as what combination of stocks and bonds to invest in—humans look at how the factors correlate with each other, according to a new study by researchers from the California Institute of Technology (Caltech) and University College London.

The finding suggests our brains are constantly doing calculations that enable us to keep track of correlations between dynamic factors. These correlations allow us to observe the outcome of one action and then infer the outcomes of other related actions or events without having to experience them individually. This leads to quicker responses than would be possible if we made all choices based on rules of thumb or through trial and error, as scientists had previously assumed. The new study, to be published in the September 22 issue of the journal Neuron, also identifies the regions of the brain involved in tracking these correlations.

For Peter Bossaerts, one of the authors of the study and a professor of finance at Caltech, the implications in terms of the financial choices that people make are particularly interesting. “When investing in more than one asset, such as stocks and bonds, it is important that one does so with the right mix, which is determined by the correlation between the returns on the assets," says Bossaerts, the William D. Hacker Professor of Economics and Management. "What we wanted to know was, 'How do people actually make such judgments?'"

To get to the heart of that question, the researchers scanned the brains of 16 subjects using functional magnetic resonance imaging (fMRI), which measures activity in the brain, while the subjects played a game of resource management. The subjects were instructed to adjust the proportion of energy coming from two renewable energy sources—a solar plant and a wind farm—in an effort to create the most stable energy output possible.

In the game, the outcomes of the two energy sources varied with each other. So, for example, when they were positively correlated, the wind blew while the sun was shining, so each source generated power. The researchers changed the correlation between the two sources throughout the experiment, thus requiring the subjects to continuously revise their predictions of the outcomes of those correlations in order to perform well.

The team found that the subjects changed their behaviors to reflect new correlations far faster than they could have had they been relying on simple trial and error. Instead, they were estimating the correlation between the sources, tracking mistakes in their estimations, and adjusting their estimates of the correlation on the fly.

Klaus Wunderlich, lead author of the Neuron paper, began designing the study while a graduate student in computation and neural systems at Caltech. Now a researcher at the Wellcome Trust Centre for Neuroimaging at University College London, Wunderlich says there is an evolutionary importance to such correlations: “Imagine our ancestors foraging for food in the woods. They could spend their time either collecting berries or hunting deer," he says. "Now imagine they have previously observed that deer eat berries. So, as they are foraging, if they notice a lack of fresh berries, they can infer that there are lots of deer around and instead focus on hunting.”

In the financial world, where returns dictate that the appropriate mix of stocks and bonds should be determined by their correlation, the results from this study should disprove the need for rough rules of thumb such as one that says more risk-averse people should put a larger percentage of their money into bonds. "We show in this research that people combine sources in an optimal way, taking into account explicitly, and not through trial and error, how outcomes are correlated,” Bossaerts says.

When the researchers looked at the fMRI scans of the subjects as they played the game, they saw increased activity in two regions of the brain commonly associated with emotion—the insula and the anterior cingulate cortex. They believe the brain makes predictions about correlation strengths in the insula and tracks the accuracy of its predictions in the anterior cingulate cortex.

Bossaerts says that the location of these correlation-forming and outcome-tracking functions in regions of the brain often thought of as "emotional" provides additional evidence that rational mathematical thinking and emotions are not at odds. "It is integral to good decision-making to be emotional," he says. "Being completely emotion-free can be detrimental, especially when making decisions under uncertainty."

The results also indicate that damage to these parts of the brain—through drug use or medication, for example—could easily lead to errors in decision-making or in understanding correlations.

The Neuron paper is titled "Hedging your bets by learning reward correlations in the human brain." In addition to Wunderlich and Bossaerts, coauthors include Mkael Symmonds and Raymond Dolan, both from the Wellcome Trust Centre for Neuroimaging. The work was supported by a Wellcome Trust Program Grant and a Max Planck Research Award.