Pasadena, Calif.—In a finding that sheds new light on the neural mechanisms involved in social behavior, neuroscientists at the California Institute of Technology (Caltech) have pinpointed the brain structure responsible for our sense of personal space.

The discovery, described in the August 30 issue of the journal Nature Neuroscience, could offer insight into autism and other disorders where social distance is an issue.

The structure, the amygdala—a pair of almond-shaped regions located in the medial temporal lobes—was previously known to process strong negative emotions, such as anger and fear, and is considered the seat of emotion in the brain. However, it had never been linked rigorously to real-life human social interaction.

The scientists, led by Ralph Adolphs, Bren Professor of Psychology and Neuroscience and professor of biology and postdoctoral scholar Daniel P. Kennedy, were able to make this link with the help of a unique patient, a 42-year-old woman known as SM, who has extensive damage to the amygdala on both sides of her brain.

"SM is unique, because she is one of only a handful of individuals in the world with such a clear bilateral lesion of the amygdala, which gives us an opportunity to study the role of the amygdala in humans," says Kennedy, the lead author of the new report.

SM has difficulty recognizing fear in the faces of others, and in judging the trustworthiness of someone, two consequences of amygdala lesions that Adolphs and colleagues published in prior studies.

During his years of studying her, Adolphs also noticed that the very outgoing SM is almost too friendly, to the point of "violating" what others might perceive as their own personal space. "She is extremely friendly, and she wants to approach people more than normal. It's something that immediately becomes apparent as you interact with her,” says Kennedy.

Previous studies of humans never had revealed an association between the amygdala and personal space. From their knowledge of the literature, however, the researchers knew that monkeys with amygdala lesions preferred to stay in closer proximity to other monkeys and humans than did healthy monkeys.

Intrigued by SM's unusual social behavior, Adolphs, Kennedy, and their colleagues devised a simple experiment to quantify and compare her sense of personal space with that of healthy volunteers.

The experiment used what is known as the stop-distance technique. Briefly, the subject (SM or one of 20 other volunteers, representing a cross-section of ages, ethnicities, educations, and genders) stands a predetermined distance from an experimenter, then walks toward the experimenter and stops at the point where they feel most comfortable. The chin-to-chin distance between the subject and the experimenter is determined with a digital laser measurer.

"Respecting someone's space is a critical aspect of human social interaction, and something we do automatically and effortlessly," Kennedy says. "These findings suggest that the amygdala, because it is necessary for the strong feelings of discomfort that help to repel people from one another, plays a central role in this process. They also help to expand our understanding of the role of the amygdala in real-world social interactions."

Adolphs and colleagues then used a functional magnetic resonance imaging (fMRI) scanner to examine the activation of the amygdala in a separate group of healthy subjects who were told when an experimenter was either in close proximity or far away from them. When in the fMRI scanner, subjects could not see, feel, or hear the experimenter; nevertheless, their amygdalae lit up when they believed the experimenter to be close by. No activity was detected when subjects thought the experimenter was on the other side of the room.

"It was just the idea of another person being there, or not, that triggered the amygdala," Kennedy says. The study shows, he says, that "the amygdala is involved in regulating social distance, independent of the specific sensory cues that are typically present when someone is standing close, like sounds, sights, and smells."

The researchers believe that interpersonal distance is not something we consciously think about, although, unlike SM, we become acutely aware when our space is violated. Kennedy recounts his own experience with having his personal space violated during a wedding: "I felt really uncomfortable, and almost fell over a chair while backing up to get some space.

Across cultures, accepted interpersonal distances can vary dramatically, with individuals who live in cultures where space is at a premium (say, China or Japan) seemingly tolerant of much closer distances than individuals in, say, the United States. (Meanwhile, our preferred personal distance can vary depending on our situation, making us far more willing to accept less space in a crowded subway car than we would be at the office.)

One explanation for this variation, Kennedy says, is that cultural preferences and experiences affect the brain over time and how it responds in particular situations. "If you're in a culture where standing close to someone is the norm, you'd learn that was acceptable and your personal space would vary accordingly," he says. "Even then, if you violate the accepted cultural distance, it will make people uncomfortable, and the amygdala will drive that feeling."

The findings may have relevance to studies of autism, a complex neurodevelopmental disorder that affects an individual's ability to interact socially and communicate with others. "We are really interested in looking at personal space in people with autism, especially given findings of amygdala dysfunction in autism. We know that some people with autism do have problems with personal space and have to be taught what it is and why it’s important," Kennedy says.

He also adds a word of caution: "It's clear that amygdala dysfunction cannot account for all the social impairments in autism, but likely contributes to some of them and is definitely something that needs to be studied further."

Other coauthors of the paper, "Personal Space Regulation by the Human Amygdala," are postdoctoral scholar Jan Gläscher and J. Michael Tyszka, the associate director of the Caltech Brain Imaging Center and director of Magnetic Resonance Physics. The work was funded by the National Institute of Mental Health, the Simons Foundation, the Della Martin Foundation, and a global Center of Excellence grant from Japan. 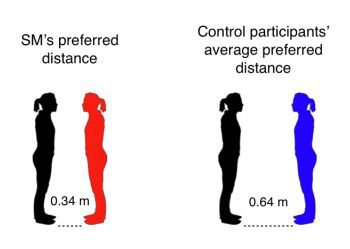