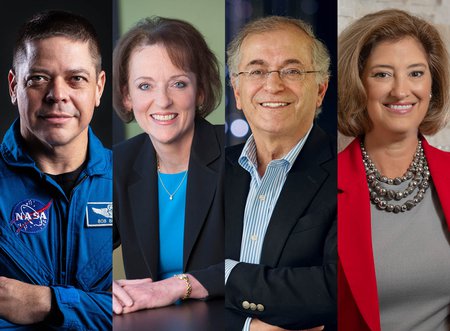 Each year, Caltech awards the Institute's highest honor, the Distinguished Alumni Award, to a few alumni in recognition of personal and professional accomplishments that have made a noteworthy impact in a field, community, or society more broadly.

"Caltech's influence on the world is expressed powerfully through its graduates," says Caltech president Thomas F. Rosenbaum. "Their achievements impact a broad spectrum of disciplines and occupations. It is a privilege to recognize this year's Distinguished Alumni Award recipients, each of whom has demonstrated a special ability to affect the present and pave the way for the future."

NASA astronaut Bob Behnken (MS '93, PhD '97) is honored "for his accomplished career as an astronaut on three space missions, including his history-making journey in 2020 as part of the first crew to reach Earth orbit aboard a commercially developed and operated spacecraft, as well as for his work as a public advocate for science and engineering."

Behnken was selected as an astronaut 21 years ago, in July of 2000. After astronaut candidate training, he was assigned to support space shuttle launch and landing activities at the Kennedy Space Center. Within the Astronaut Office, he also supported International Space Station (ISS) operations and human exploration development activities, and was NASA's chief astronaut from July 2012 to July 2015.

Last year, Behnken served as joint operations commander on the first crewed flight of the SpaceX Crew Dragon and as flight engineer on the ISS for Expedition 63, spending 62 days aboard the station and logging more than 110 hours supporting the orbiting laboratory's research investigations while also participating in scientific experiments and public engagement events. It was his third mission to the ISS.

Behnken is tied for the record number of spacewalks by an American astronaut with a total of 10: three during each of his two space shuttle flights and four during his time on the ISS.

Barbara Burger (PhD '87), president of technology ventures and vice president of innovation at Chevron, receives this award "for her long and extraordinary career as a business leader at Chevron, spanning roles in science and business, marketing, and investment; her contributions to advancements in the energy transition; and for her prominent role as a mentor and advocate for women in science and industry."

Burger joined Chevron as a research chemist in 1987, the year she graduated from the Institute. Through her career, Burger has held management positions across international marketing, chemicals, technology marketing, lubricants, and technology ventures. She holds board and advisory positions with several innovation and climate tech investment funds, incubators, and accelerators as well as the external advisory council for the National Renewable Energy Laboratory. Burger serves on the board of the Houston Symphony Society as well as the Board of Trustees for the University of Rochester.

Burger is committed to supporting the new generations of women who, like her, choose nontraditional pursuits. To that end, Burger recently endowed the Barbara J. Burger Fellowship at Caltech, which focuses on female doctoral students in chemistry who aim to build careers outside academia, as well as the Barbara J. Burger Women in Chemistry Annual Prize, which furnishes research-related support for female graduate students in chemistry at Caltech. In addition, she provided discretionary funds for Women in Chemistry (WIC), a Caltech student organization.

Charles Elachi (MS '69, PhD '71), Caltech professor emeritus of electrical engineering and planetary science, is recognized "for his distinguished leadership in space exploration and planetary science as the longtime director of the Jet Propulsion Laboratory, where he was instrumental to realizing missions across the solar system including our own planet Earth, and for his many contributions helping to map out NASA's long-term scientific future."

When Elachi retired as the director of the Jet Propulsion Laboratory in 2016, he closed a 45-year career on Lab. Elachi established the field of spaceborne imaging radar, helping to guide it from a small research area to a significant field of endeavor. He became director of JPL in January 2001.

Elachi was elected to the National Academy of Engineering in 1989 and is the recipient of an honorary doctorate from the American University of Beirut, the Chevalier de la Légion d'Honneur from the French Republic, and the International von Kármán Wings Award. He twice received the Lebanon National Order of Cedar and is a three-time recipient of the NASA Outstanding Leadership Medal. Elachi has also received the NASA Distinguished Service Medal. To honor his leadership and contributions to space exploration, in 2017 NASA renamed the Mission Control Center at JPL the Charles Elachi Mission Control Center.

Elachi has served as a principal investigator on numerous NASA-sponsored projects and has authored more than 230 publications in the fields of space and planetary exploration. In 1989, Asteroid 1982 SU was renamed 4116 Elachi in recognition of his contributions to these fields.

Elachi earned a BS in physics from the University of Grenoble, France, and the Diplome Ingenieur in engineering from the Polytechnic Institute, Grenoble, as well as an MS and a PhD in electrical engineering from Caltech. He later received an MBA from USC and an MS in geology from UCLA.

Laurie Leshin (MS '89, PhD '95), president of Worcester Polytechnic Institute (WPI), is lauded "for her barrier-breaking leadership at universities such as Worcester Polytechnic Institute, which has been recognized for both teaching and research excellence and essential strides in diversity, equity, and inclusion under her guidance as the first woman to serve as president; and for her accomplishments as a distinguished geochemist and space scientist."

When Leshin became WPI's 16th president in 2014, the first woman in that role, she had more than 20 years of experience as a leader in academia and government service, having served as dean of the School of Science at Rensselaer Polytechnic Institute, as deputy director of NASA's Exploration Systems Mission Directorate, and as deputy director for Science and Technology and director of Science and Exploration at NASA's Goddard Space Flight Center.

Through much of her administrative career, Leshin continued her science, including serving as a member of the Mars Science Laboratory Science Team that analyzed data collected by the Curiosity rover to find evidence of water on the surface of Mars. At WPI, she has focused on ways to address gender disparity in STEM, among other efforts.

The 2021 DAAs were selected by the Distinguished Alumni Award Selection Committee, which comprises Caltech alumni, faculty, and administrative leaders, from nominations put forth by Caltech alumni and the Caltech community.