Two scholars are nearing the end of a yearlong journey into history, utilizing the humanities expertise of Caltech and the archival holdings of the Huntington Library, just a mile distant. Now in its third year, the Materialities, Texts and Images (MTI) program is part of a long-standing collaboration between the two institutions. Started by John Brewer, the Eli and Edye Broad Professor of Humanities and Social Sciences, in collaboration with Steve Hindle, the W. M. Keck Foundation Director of Research at the Huntington, MTI has allowed the two visiting scholars, Julie Park, an associate professor for research at Vassar College, and Susan Barbour, a lecturer at Somerville College, University of Oxford, to examine the Huntington's collections in support of their research. The holdings include art, literature, and personal and business correspondence from Western European and American society, dating from the Middle Ages through the 20th century.

"John Brewer established the MTI program based on his belief that the humanities should be more than the sum of the parts," says Jean-Laurent Rosenthal, the Rea A. and Lela G. Axline Professor of Business Economics and chair of the Division of the Humanities and Social Sciences. "At Caltech, there has always been the idea that we can bring a bunch of people together to solve interesting problems in science, engineering, and social science. So John thought, why not do the same in the humanities? The MTI program really showed that this can be very productive."

Hindle shares leadership of the collaboration. "MTI was designed to bring an institutional structure to a series of relationships between the Huntington and Caltech that had in the past been relatively informal and interpersonal," he says. "Each year we have appointed two postdoctoral researchers, and they split the time in the program between the two institutions. It's been immensely successful."

At the core of the MTI program is the study of things—actual objects—within the context of Western European history. These can include books, paintings, manuscripts, and even calling cards (the Huntington has one of the largest collections of 18th- and 19th-century calling cards in the world). Anything that represents a material form of communication or authorship can be studied. What messages did these items convey and how did they do so? What do the objects show us about their authors or creators? How have the processes involved in their creation altered this message, and what does that communicate to the end-user? These are some of the research areas that exist within the MTI program.

"Things and materiality have really become a very hot topic in the humanities and social sciences," says Park. "I think it's really beautiful the way the two areas have come together. It's a truly interdisciplinary area."

Park's MTI project examined the physical and material environment of mental life in 18th-century England, and the relationship between those environments and the rise of the novel. The 18th-century English novel re-created how people saw the world around them, in particular the insides of homes and public spaces. "I'm looking at both the literary genre of the novel and the material environment that works with what was then a new construction of physical space that the novel represented," she explains.

Barbour has also focused on materiality, largely through the writings of Susan Howe, a 20th-century painter, writer, and poet. Howe's wide range of artistic expression, which includes poetry, criticism, and music, lends itself to interpretation via materiality, Barbour notes. "Howe investigates disparities between handwritten documents and printed text," she says. "She looks at the blots, drawings, and other material signifiers that are not included in mechanical reproduction and that only exist in the original document. These become emblematic of the way individual lives and stories are lost to historical narratives driven by utility and relevance." In other words, commercial reproductions and other mass-produced examples of an artist's work cannot convey the full range of the artist's expression—due, as least in part, to the material differences between the originals and the representations.

The working relationship between Caltech and the Huntington has specific advantages, Barbour says. "The experience of being one of a smaller group of nonscientific 'others' at a scientific institute has distinct benefits," she says. "Because the humanities and social sciences department is at once smaller and broader, one hones the ability to appreciate overlapping methodologies of research projects that at first glance may bear little in common with one another."

Two new researchers began their MTI fellowships last month. Cora Gilroy-Ware, who has curated exhibitions at the London Tate Gallery and the Huntington Art Gallery, will be exploring the material and chemical properties of classical painting and sculpture in 18th- and 19th-century Britain, investigating how the artist's technical processes were shaped by economic and socio-political developments. Alexandre Dubé, an assistant professor of art history at Washington University in St. Louis, will research how the buying and selling of goods in French Louisiana during the colonial period affected the politics of the time.

The new fellowship appointments represent the final chapter of the MTI program, but not of Caltech's partnership with the Huntington. A continuing collaboration within the humanities is now under development and will be inaugurated when MTI concludes in June, 2016. 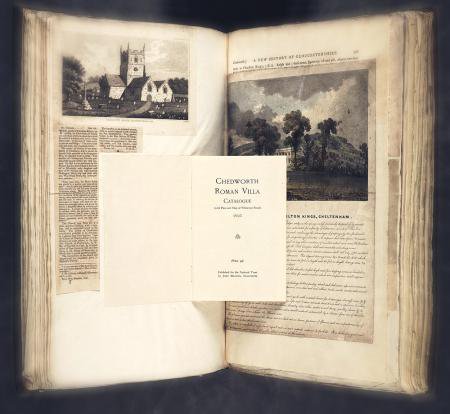 MTI is a research program that investigates the roles of a wide range of material things—books, artwork, scientific instruments, as well as natural resources such as rocks and plants—in human culture. The scope of MTI is intentionally broad. Shown here: Samuel Rudder, "A New History of Gloucestershire." Cirencester, 1779. Credit: The Huntington Library, Art Collections, and Botanical Gardens.
Image Lightbox
Subscribe
The Caltech Weekly