Teaching Film in the Time of Zoom 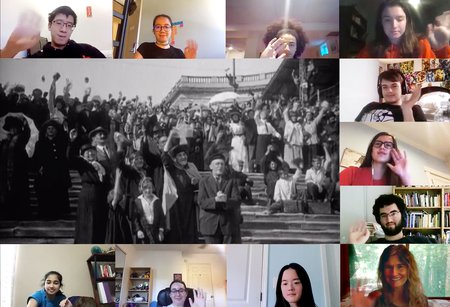 Cathy Jurca never would have thought that students waving to her over Zoom would change the way she connects with them and with the films in her Introduction to Film class. But it did.

Jurca, a Caltech English professor, teaches a 10-week first-year humanities film course, which covers the basics of film analysis and interpretation. Together, she and her students move from the era of silent movies through that of classical Hollywood, then explore French New Wave and specific genres, including the Western, before ending with the superhero movie Black Panther.

When COVID-19 led to physical distancing and remote learning, Jurca at first thought it would be relatively easy to take a class that focuses on the big screen and put it on a computer screen. "I thought that teaching film over video would just be a natural fit," she says. "But it's not."

Although watching movie clips is still an important component of each class, in the world of Zoom video conferencing it is more of an individual process than it was when they all were physically together: now, Jurca distributes a PowerPoint with links to the clips in advance and then the students switch between sitting in the Zoom virtual classroom, watching the clips on their own, and coming back together for a discussion.

This format challenged Jurca to rethink the kinds of clips she was choosing for the class. "I have to make sure that what I want them to get from the clip is something that they can see just by playing it through on their own," she notes. "Since I can't stop and start and interject, I need to make the significance more immediately apparent. For example, there is a scene early in The Seven Samurai where four farmers travel to a town in an attempt to hire samurai to help them fight a group of bandits. The farmers' overwhelming helplessness is demonstrated through dynamic tracking and panning shots of individual samurai, intercut with medium close ups of the farmers, all the while ordinary townspeople pass as a blur between these groups. A telephoto lens makes various social groups appear closer together while also underscoring their unintelligibility to each other. I broke up this scene into segments, with a lot of stills, so I could get students to see how the film communicates the samurais' confidence and the farmers' timidity and invisibility, along with the daunting challenge the latter faces. It turns out that incorporating more stills, prepared in advance, not only gave us more time for discussion but really helped students talk about Kurosawa's technique and goals for this scene."

To make sure her students feel connected during this time of social distancing, Jurca has had at least two 15-minute online meetings with each of her students during the term. "I feel like I've gotten to know my students a little bit better as individuals over Zoom," she says.

And that sense of a closer connection plays out in other ways. On campus, Jurca says, when she would walk into her classroom and greet her students, maybe two or three of them would respond. But, on Zoom, everybody waves.

"I love that," she says. "There's something so sweet about it. I feel like I got 20 apples for the teacher. And I like waving to them. It's as if the wave reaches out across the distance."

Reflecting on this ritual of waving caused Jurca to reinterpret how she saw a moment in Battleship Potemkin, a Soviet silent film she covers in her class. "In the film, there's a Russian sailor who's killed in a mutiny onboard a ship, and he's brought to the city of Odessa, where the townspeople come by the thousands to mourn him. At first, they start to sing in a gesture of solidarity. And then they get angry. They become revolutionary. They throw away their handkerchiefs, and they start shaking their fists."

In the past, that was where Jurca would stop her analysis. But recently she noticed that, in the next section of the film, there is a group of people waving. "I never really paid as much attention to this," she says. "I had never really noticed that there's something past the anger. The people are trying to bridge this distance by waving at the ship that's out in the harbor."

Jurca discussed this with her students. "All our waving at each other on Zoom has really changed how I see that moment in the film," she says. "Moving forward, this will be my anecdote about my work during this time. What COVID taught me is the symbolic imprint of that wave."