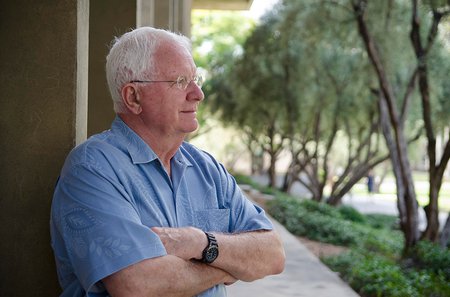 "Everything has a price," the saying goes, and though that might sound cynical, taking the adage seriously can lead to a lifetime of fascinating inquiry. Just ask Richard W. Roll, who recently joined Caltech as the Linde Institute Professor of Finance. After spending nearly 40 years at the UCLA Anderson School of Management exploring everything from interest rates to asset portfolios, Roll has moved slightly eastward to help Caltech expand its offerings in finance.

In addition to his role as professor, Roll has consulted widely over the course of his career for agencies and corporations that are commonplace in the American lexicon: AT&T, Freddie Mac, J.P. Morgan, AARP, and the Securities and Exchange Commission, among others. Roll recently spoke with us about his research, his career, and his new position at Caltech.

What excites you about finance?

It's just enjoyable work, and very practical too. For example, mergers and acquisitions, a topic of a recent paper of mine, is a gigantic business. About 15 percent, by market value, of firms in this country are involved in mergers every year. If you can make these deals more profitable and fair for everyone involved, you've had a real impact.

I wrote a paper back in the 1980s titled "The Hubris Hypothesis of Corporate Takeovers." It was a theoretical paper arguing that when companies bid in an auction to acquire another firm, they almost always pay more than anyone else is willing to, and they often pay a penalty for that. It's known as "the winner's curse." If you win the auction, you bid more than anyone else would bid. As a result, the price of your stock often drops, because the market is saying you probably made a mistake.

In this recent paper ["The Hubris Hypothesis: Empirical Evidence"] we were able to test this hypothesis—to actually see how much overbidding goes on in mergers and acquisitions by looking at a large dataset of 4,299 mergers from 1986 to 2008. We found that indeed there is a lot of overbidding. It's pretty prevalent.

Is mergers and acquisitions your major research focus?

No, no. There are two main areas of finance: corporate finance, which is what corporations do, and capital markets—the stock market, the bond market, things like that. I do work in both. Another of my recent papers ["Resolving the Errors-in-Variables Bias in Risk Premium Estimation"] gives a new angle on old questions, proposing a technique for making more accurate predictions about stock market behavior.

What will you be teaching at Caltech?

This fall I'm teaching the beginning finance course, BEM 103. Seventy students have registered for the course, most of them undergrads.

Do you have any sense of how teaching here might compare with your experience at UCLA?

At UCLA there are no undergrads in the business school—all the students are MBA or PhD students. But I hear that the students here are very smart, and I'm looking forward to working with them.

I imagine that most of my students at Caltech will be in engineering or physics or something like that, but they might want to change to economics at some point, or they might just want to learn something about the business side of the world as they begin their scientific careers. A lot of Caltech faculty members are also interested in financial matters. Some have patents and want to start companies, but they don't know anything about finance. I've talked to a few already.

Did you always know you wanted to study finance?

No, initially I was an engineer. I studied aeronautical engineering at Auburn University and then went to work for Boeing. It was only when Boeing decided to prepare me for engineering management and sent me to the University of Washington to get an MBA that I learned anything about business. I found I liked it better than engineering, so I quit my job with Boeing and went to the University of Chicago to get a PhD in finance, statistics, and economics.

Do you have any collaborations planned at Caltech?

Michael Ewens also just started here, and we might do something together. In fact, he and I are planning to run a finance seminar series. We have already invited Steve Ross, a Caltech alum [BS '65], professor of financial economics at MIT, and a member of the Caltech board of trustees. Ross, who studied physics at Caltech, isn't the only Caltech alum who has gone into economics. Nobel Prize winner Bob Merton [MS '67] is also an economist on the faculty at MIT.