Skip to main content
Caltech Home > HSS Home > About > Humanities > What Is This? 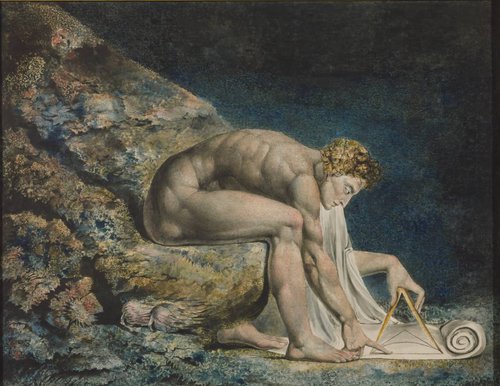 As a compelling, beautifully rendered image of a great scientist, William Blake's depiction of Isaac Newton, produced during the ferment of the French revolution, is a fitting emblem for the humanities at Caltech. Blake, a highly independent artist, poet, and philosopher, was a radical and innovative thinker who questioned cliché and convention and never feared to overturn orthodoxy. His vision of Isaac Newton reminds us of the many ways in which we can see the world: not just through the precision of science but also through art, literature, and history.

Art and science have often intersected at Caltech. One notable example is the art exhibition space that existed in Baxter Hall, home to much of the HSS division, from 1971 to 1985. Called the Baxter Art Gallery and founded by professor David R. Smith, it focused on regional contemporary art, displaying a range of materials and topics—many with a scientific twist, such as the overlap of art and technology and the history of space photography. Sponsorship from the Pasadena Art Alliance and a membership program later helped to fund public educational efforts such as lectures and talks, films, tours, and performances. After the gallery closed in 1985, curator Jay Belloli, who had served as director for the last few years, brought its final exhibition on an international tour and helped to establish the Armory Center for the Arts in Pasadena. The gallery's records and remaining collection were donated to the Smithsonian's Archives of American Art. The images below include four photographs taken of Baxter Art Gallery exhibitions and two recent photographs showing original exhibition posters, which now hang on the wall opposite room 25 on the ground floor of Baxter Hall.