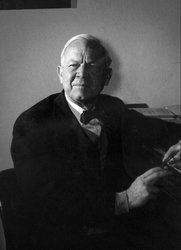 Clinton Judy Credit: Courtesy of the Archives, California Institute of Technology In 1926, Caltech unveiled a new organizational structure that split the Institute into divisions—one of which was the Division of the Humanities. The chair of the new division was Professor of English Language and Literature Clinton Judy, who had been at the Institute since 1909 and would teach there for 40 years.

Judy, considered the father of humanities at Caltech, taught a popular graduate seminar at his San Marino home, where a diverse swath of the Caltech community would converge and discuss everything from the influence of science on literature to philosophy. He was also a serious book collector and had connections to many literary figures of the time, including Virginia Woolf and Aldous Huxley. After Judy died, Caltech bought a large portion of his collection—which filled two floors of shelves in his house—to start the Judy Library in Baxter Hall.

As Caltech grew to become a preeminent science and engineering university over the next several decades, the humanities remained an important part of a Techer's education. In 1964, the Institute began offering bachelor of science degrees in the humanities for the first time, with options in history, English, or economics. The division also expanded to include the social sciences. A year later, it was renamed the Division of the Humanities and Social Sciences. Starting in 1972, graduate degrees in social sciences were offered. 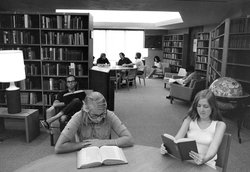 JUDY LIBRARY, 1974 Credit: Floyd Clark Although Caltech is best known as an institute of science and technology, the humanities have always been an integral part of the Techer experience. When the Institute was founded in 1891 as Throop University, courses included English, composition, literature, rhetoric, and foreign languages. Even in 1907, when Throop became a dedicated institution of higher learning focused on technology—offering only degrees in electrical, mechanical, and civil engineering—the curriculum still emphasized disciplines such as English, history, and economics.

The importance of the well-rounded individual and creativity wasn't lost on George Ellery Hale, the astronomer who helped mold Caltech into the institute it is today. "We must not forget," he said, "that the greatest engineer is not the man who is trained merely to understand machines and to apply formulae, but is the man who, while knowing these things, has not failed to develop his breadth of view and the highest qualities of his imagination. No great creative work, whether in engineering, or in art, in literature or in science, has ever been the work of a man devoid of the imaginative faculty." 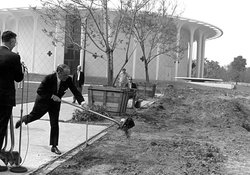 BAXTER HALL GROUNDBREAKING (HALLETT SMITH WITH SHOVEL), 1969 Credit: Floyd Clark The division immediately began making its mark in the social sciences. In the 1970s, for example, Charlie Plott, the Edward S. Harkness Professor of Economics and Political Science, and Vernon Smith (BS '49), a former Caltech undergraduate and Sherman Fairchild Distinguished Scholar who would win the Nobel Prize in Economics in 2002, pioneered the field of experimental economics. Using students as test subjects, they were the first to use controlled laboratory experiments to study how markets and economic institutions behave.

In the 1980s, HSS faculty established the first of several social-science experimental labs, which tackled a variety of subjects, including how markets work, pricing of financial assets, behavior, and decision making.

During the next decade, researchers in HSS helped develop the field of political economy, in which the mathematical models of economics are applied to political science. For example, Richard McKelvey, who was most well known for developing the mathematical theory of voting, used statistical techniques to make numerous contributions in political science, experimental economics, social-choice theory, and game theory. 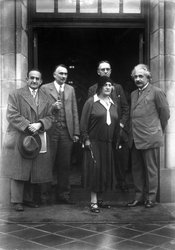 The Einsteins with group in front of Dabney Hall, 1931 Credit: Courtesy of the Archives, California Institute of Technology From its earliest days, the social sciences PhD program has produced prominent scholars in the fields of economics, public policy, political science, law, and finance. Graduates include pioneers in the fields of political economy and mechanism design, among many others.

Meanwhile, award-winning research in the humanities has focused on areas such as ethics, political philosophy, the philosophy of science, European and American literature, medieval history, and the history of science.

The division has benefited from a close relationship with The Huntington Library, Art Museum, and Botanical Gardens, which was established in 1921 when Hale urged railroad tycoon Henry Huntington to turn his collection of rare books and paintings into a research center. The library, which is only about a mile from campus, continues as an invaluable resource for art, literature, and history. In 2013, The Huntington and Caltech established their first joint research endeavor, a multidisciplinary program called Materialities, Texts and Images (MTI), which promoted research focusing on tangible, material objects such as books, paintings, and other artifacts.  Three years later, MTI expanded into the Caltech-Huntington Humanities Collaborations (CHHC), which are organized around a series of targeted interdisciplinary research projects–or "modules"–that run for two years, linking workshops, conferences, visiting faculty, and fellowship and postdoctoral appointments across both institutions. 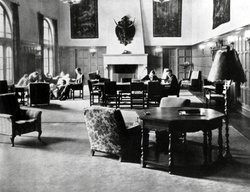 Dabney Lounge, ca. 1931 Credit: Courtesy of the Archives, California Institute of Technology The Einstein Papers Project, which started in 1986, also represents a major research endeavor—perhaps the most ambitious project of its kind. A team of scholars is collecting, transcribing, annotating, and publishing tens of thousands of Albert Einstein's letters, scientific manuscripts, lecture notes, speeches, and other documents, providing an unprecedented written record of the scientist's life and legacy. The published volumes, Collected Papers of Albert Einstein, so far cover Einstein's life until his 44th birthday. The entire archive—containing more than 80,000 documents—is available online.

Caltech continues to play a leading role in the history and philosophy of science and technology. In that spirit, the division offers the Francis Bacon Award to a scholar who has made a significant impact in the history of science or technology, or historically engaged philosophy of science. Winners of the prize, which is awarded biennially, visit Caltech for three months and participate in the Francis Bacon Conference. 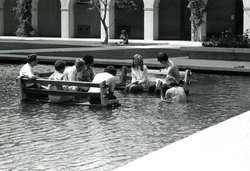 Jenijoy La Belle teaches her class in the Millikan Library reflective pool, 1970 Credit: Courtesy of the Archives, California Institute of Technology During a speech in 1911 at what was then Throop University, Theodore Roosevelt expressed his hope that of the 100 graduates produced by institutions like Throop, 99 would do industrial work better than anyone else. But the 100th graduate, he said, would have a certain "cultural scientific training"—a scholarly sensibility that would enable the scientist or engineer to connect with the greater society. Our civilization, he said, "never will reach the highest standard, until we also produce in abundance the men who will do the non-remunerative work of science, who love learning for its own sake, and who have the gift of expression."

When Throop became Caltech, the Institute focused its efforts on developing that 100th person. And since then, the humanities and social sciences have endured as an indelible part of that tradition.